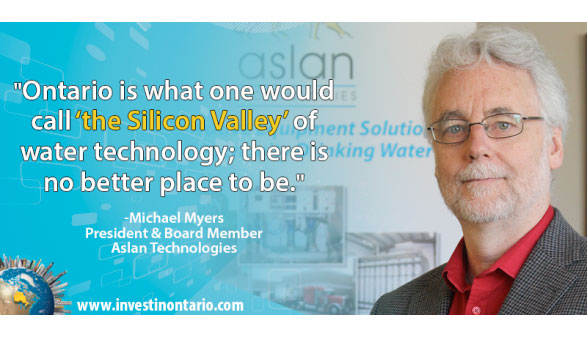 “While the U.S. has its share of water technology hubs – Cincinnati, Milwaukee, Pittsburgh and Massachusetts spring to mind– Ontario, Canada has generated more water-related patents over the last 30 years than any of its ‘water-cluster’ peers,” writes the chief editor of the U.S. magazine, Water Innovations. At the centre of Ontario’s water technology hub is Burlington, part of the Greater Toronto Region. Invest in Ontario had the opportunity to speak with Michael Myers, President and Board Member of Aslan Technologies, a Burlington-based design and manufacturing company that has experienced tremendous success serving the chemical, water and wastewater treatment industries.

A part of Ontario’s long history of water technology innovation

Ontario’s reputation as a world leader in water technology R&D is built upon decades of ground-breaking innovation, much of which took place while Myers worked in product design and later served as VP of Manufacturing for Zenon Environmental (now GE Water). However, Zenon was renowned for developing membrane filtration technology, while Aslan Technologies focuses on alternative technologies, like Advanced Sequencing Batch Reactor (ASBR), that are more suitable for smaller scale projects. “It’s not that I dislike membrane filtration, I’ve just come to believe that membrane filtration is not always the best solution,” says Myers.

Take for example a recent project undertaken by Aslan Technologies to provide sewage treatment to a community of 300 homes in a rural Ontario community called Shakespeare. “Consultants hired by the community suggested constructing a pipeline that would pump water 10-15 kilometers away to be processed,” says Myers. “Not only would it cost a whopping $11 million dollars, but since the town was in a different county, the community would have little control in managing costs going forward.” The system installed by Aslan Technologies represents less than half of the $6.5 million total project cost and takes one-half day per week for the treatment facility’s lone employee to manage as part of his other ongoing responsibilities.

“The system is much easier and cheaper to run,” Myers explains. “It’s nothing like operating a large treatment plant.”

Guiding us through his manufacturing facility, Myers points to a drinking water system that occupies roughly a couple hundred square feet of the shop floor. “This system is going to Iran. Water treatment systems are one of the only products we are allowed to trade with the country. It will provide approximately 2.7 million litres of clean drinking water, which is enough to serve around 10,000 people. As you can see, it’s very compact.” Aslan Technologies has exported similar systems to 25 countries, and their list of clients include J.W. Marriot Hotel, ClubLink golf courses, dozens of small communities across North America, and 15 U.S. embassies around the world.

Aslan Technologies water treatment solutions are also a natural fit for response to disasters, like major hurricanes, flooding and earthquakes, which disrupt local treatment plants. At roughly the size of two large soda vending machines, Aslan Technologies’ Emergency Relief Drinking Water System is capable of dispensing 900 x 1.5L bags of drinking water per hour. “Compared to the alternative, which is usually trucking in tens of thousands of bottles of water, this is more efficient in terms of transportation costs and there is very little footprint.” The bags used to package the water are 100% biodegradable, while according to Toronto’s York University, plastic bottles are only about 30% recyclable, and take about 90ml, or 3 fluid ounces, of oil to produce, on average.

“Ontario is the Silicon Valley of water technology”

Asked whether Ontario will continue to be the location of choice for Aslan Technologies’ expansion plans, Myers answers definitively, “Absolutely. Ontario is what one would call ‘the Silicon Valley’ of water technology; there is no better place to be. We have great relationships with both the municipality of Burlington, and the Government of Ontario. The City of Burlington has been a great supporter of ours and the Ontario government has helped us expand internationally. Joining government tradeshows and missions affords us that extra credibility that opens doors for new business opportunities.”
Aslan Technologies is now expanding, with a second manufacturing facility planned to open in Burlington. Growing their business in Ontario allows them to draw upon one of the world’s best sources of talent, research centres and not-for-profit organizations dedicated to water technology.